Time to say good-by to the fragrant evergreen forests of redwood trees and relocate our home to the ocean views and saline breezes of Brookings Oregon for an extended visit with family.  Morning coffee, jacks up, slides in, car hitched behind us and we are ready to travel.

The familiar blankets of fog roll in and out along our route and a few miles down the road, our first speed reduction, signs warning us of road work up ahead.

Creeping slowly past sections of road damage, the second slow down was construction workers laying the road base for a new lane. 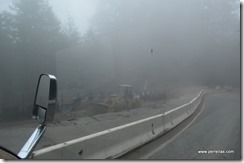 The third delay several miles further, smoothing out fill for another the new lane. 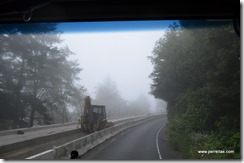 Fourth slow down, a couple more miles down, the road completely gone and new a lane needing to be built. 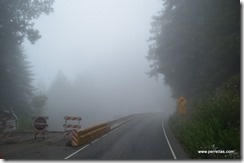 Fifth pause, the lane was nearly ready for the final layer of pavement. 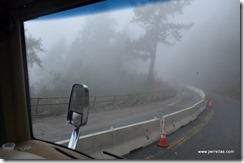 Construction sites required a wait, then a lead truck guided each lane direction, one line at a time, over the single lane passage.  Traveling over narrow roads, barely wide enough for a car, twisting along the edge of Oregon’s rocky coastline, drop offs that would have you Oooing and Aweing at the scenic views if you weren’t praying for the road to stay firmly under the tires of your 20 plus tons of heft. Fear of slipping off into the abyss kept me from enjoying scenic road construction areas for part of the journey but thick fog was cover for some of the unknown and the illusion of safety was calming until the “thick as pea soup” would break. 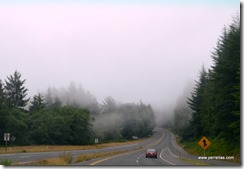 The closer we drew to our destination, the more fog lifted and unhindered crisp clear shades of forest greens and wooden tree trunk browns came into view. 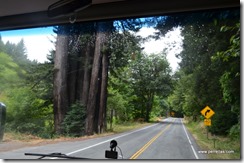 Rising early, fighting the fog and road work, traveling at a crawl, all necessary to secure a space at the highly popular Brookings Elks Lodge.  We arrived in time to get the last site. Not the coveted spacious grassy and treed 50 amp luxury spot with an enormous corner yard but the slice of gravel with full hookups served our needs well enough for our stay.

For the location and price, we seek out an Elks Lodge instead of the many local private and National seaside RV parks nearby.  Only 30 amp service but at a third of the cost, Elks Lodge RV Parks are my favorite, especially when my lungs are already stressing from smoky campfires. No fires allowed, fur babies are many, children are few, evenings are peaceful, mixed drinks are dirt cheap and neighbors are friendly.

A visit with family first thing next morning brought the warning “do not release pets into the wild” effectively into our immediate field of vision.  My father told us an unthinking renter released baby rabbits that became of breeding age and turned the few into multitudes.  Bunnies were appearing in yards and on the country roads surrounding the neighborhood.  If the wandering dogs or the local “wild things” don’t kill them, disease or cars will.

On days when we had only a short time for strolling, the long flat stretch of beach that borders a local hotel and dead-ends at the Chetco River was our choice.  Early evenings gave us tranquil views of local fishing vessels chugging in with their wild caught seafood bounties.  At the docks, they sell off most to restaurants and the balance to customers local waiting in turn.

Early one morning at low tide, after the fog had receded from the river and with the promise of possibly finding sea glass, the three of us took a trip to McVay Rock State Recreation Site.  After a leg stretching for KatieBug in the leash-free fenced dog park, we all climbed down the short slightly steep path to explore.  I spotted multitudes of Sea snails, 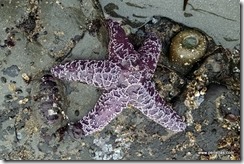 and sea anemone.  Tiny ocean critters were in abundance, sea glass chose not to make an appearance. 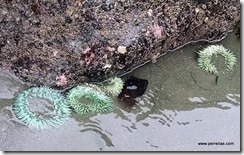 The next two weeks we chatted with family, dined together and strolled along the shore in-between tending to whichever of LilyPad’s minor repairs John could personally handle with ease.  Sunsets included strolls along the ocean and taking advantage of relaxing down time with my beloved 89 year old father and spunky step mom. 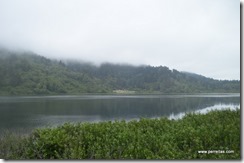 Mondays and Wednesdays are special meal deals at Lucky Casino a few miles across the border in California. Meal specials are economical, fresh, plentiful and tasty so dined often. The casino has a smoke free side but when we go early there isn’t much smoke. The drives to and from Lucky Casino are excellent viewing areas for the herds of Elk that graze the open grasslands near Highway 101.

Brookings and Harbor are tiny towns, not what I would call a major destination but there is a large chain grocery, a shipping port, the Chetco River and Harris Beach State Park, all summer family draws. Harris Beach has ADA access and is flat so being able to walk along the beach skirting the waves is a joy for me and KatieBug. 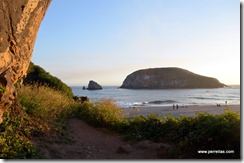 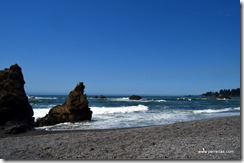 For its size, the town has only a few negatives, the biggest being the manufacturing plant spewing out fumes from glue board production. Breathing the fumes is like sniffing glue. Can you say “brain damage”? It is so strong, the Fred Meyers located next to the plant halted my ability to grocery shop.  One whiff from the parking lot, when I exited the car, my voice got raspy, my lungs choked and I got an instant migraine. We are staying up the hill, no fumes blow our way, so from now on John gets the pleasure of buying groceries while we are planted in Brookings.

Another unpleasant down side is the unending flow of street people. When we first arrived, one man stumbled across the street against the light four times, yelling and shaking his fist. With 18 wheelers rolling by, I was sure he would get smooshed but he came back each day, repeating his threats to by-passing traffic.  The police would escort him away from traffic but he would return to his chosen spot repeatedly.

And I must mention the Marijuana stores. This tiny town of only 6,500 people has five! Weed being legal in Oregon hasn’t changed the state in any noticeable way. We didn’t see stoned people driving or wandering around in public but the parking lots had an impressive flow of traffic. 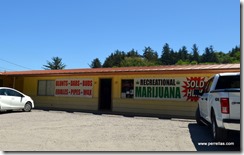 Pot shops are not the reason there are an unending flow of homeless or street people, the politically correct term for homeless persons, moving around the town. The local police department still encourages loiterers to find a destination other than the city park benches and street corners. I chatted with one street lady who struck up a conversation with me while shopping in a local resale store.  She mentioned street people love vacationing along the coastline in the summer, same as the general public. I’m not sure how they financially swing the cost of a journey, not wanting to pursue the subject, but its a nice thought, homeless being able to get out of the cold areas and be in warmer climates.

The town of Brookings was name after John Brookings, president of Brookings Lumber and Box Company, founded in 1908. Summers bring vacationers flooding into the quiet little town and filling up long stretches of beach.  This year was particularly crowded from seekers of the Total Solar Eclipse of 2017 happening August 21st, dead center overhead viewing to take place near Newport Oregon, a few hours from Brookings.  Camping sites at Harris Beach State Park had been reserved a year in advance.

The town hosts regular concerts in the park, Farmers Markets and various small town happenings crowded into weekend daylight hours.  Many of the events last throughout the summer.  We took advantage of various offerings by local growers and crafts people at Brookings Farmers Market several weekends during our stay. 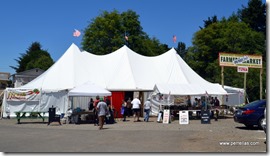 In Brookings you know your neighbors, they know you, everyone in town looks out for one another and knows everyone else’s business. My dad and step mom have lived here long enough to know most of the township. Brookings reminds me of The Woodlands as a fledgling, when our children were little and our town was picturesque, friendly and quaint.

Two weeks flew by and we are scheduled for repairs and replacements to LilyPad in Portland.  Saying our goodbyes to family over dinner at the casino, packing it all up again and ready to roll on down the road bright and early next morning.