Williams Arizona, Gate Way to the Grand Canyon, our second visit this year and our second stay at Grand Canyon Railway & Hotel and RV Park. Our stays here have been pleasant.  We appreciate the friendly staff, clean and tidy sites, it is conveniently located and a great landing spot to see the Canyon. Upon arrival we set up and made the unavoidable stock-the-cupboards trip to the local grocery for needed supplies before relaxing for the night. A must-do for planning our morning rise and day trip to the Canyon, reservations were made for KatieBug to stay at the RV parks Pet Resort. The ladies are happy to see new fur babies and KatieBug has enjoyed staying here during our previous visits. TV and a lite dinner before we all turned in early.

My daily morning ritual of checking Pollen.com, revealed today would have brisk winds and high levels of chenopods, a particularly allergenic plant group to which my lungs are highly sensitive and reactive. The conditions would remain throughout the entire day. Asthma is rarely allowed to dissuade our plans, so I packed accordingly. Mask, inhaler, water and a box of Broncolin, we were prepared for whatever may sneak up attempting to waylay our venture.  I found Broncolin lozenges in Mexico two decades ago and they have saved my lungs repeatedly from needing my prescription inhaler.

Dropping KatieBug off, she happily wagged her tail in greeting as the staff fussed over her and led her off to the spotlessly clean indoor/outdoor kennels. Within a few minutes, we were rolling out to explore the edges of the huge, miles long, deep and multicolored crater a.k.a. The Grand Canyon.  Our previous journey to the Canyon was done via train, an experience I highly recommend.  The train is relaxing, comfortable and entertaining. 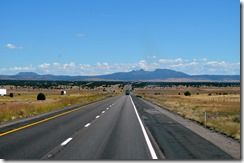 All roads leading to the Grand Canyon are level and arrow straight, broken up by patches of desert scrub brush. Over the past six years, scenery that surrounds canyon’s we have toured are consistent with what surrounds them all. An occasional range cow crouched under larger poufs of scrub is the exception to miles of quiet and desolate desert grounds rolling along until they bump up against the mountains. When clouds floated through the sky, their interesting shapes considerably enhanced the view.

Reaching the entrance gate, we broke into huge grins, our lifetime senior pass once again allowing us to bypass pricy entrance fees. Daily cost, $30.00 per car. 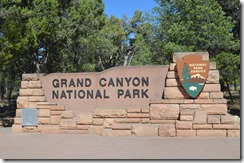 Our cost, FREE. We never tire of being thankful for senior passes. Getting old isn’t for sissies but senior perks are plentiful if you love rolling across the country visiting what America the Beautiful avails to all of her seniors. The US has an abundant variety of fabulous national parks.

Nearing the Visitor Center, the parking lot claimed to be full, but we drove in and found a spot almost immediately. Walking the short distance to the Center, we entered, waited a few minutes in line while reading the information on the walls.  A mural of the canyon covered a wall area nearest the movie line. 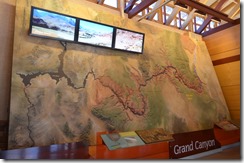 The 20 minute introduction move was titled, Journey of Wonder, Grand Canyon Through The Ages. It still amazes me, so many 19th century adventurers accepted the challenge, descending steep canyon walls to the floor of the canyon, plunging bravely into rushing uncharted waters, in a wilderness territory, armed only with primitive equipment and nearly all of them lived to tell their story. 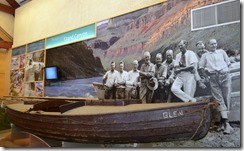 Explorers came to document, later picking locations to put up dams. If the Grand Canyon had been tamed, sadly the Colorado River would have ceased to flow through the canyon.

After the movie, our first glance of the Grand Canyon was from the edge of the rim. 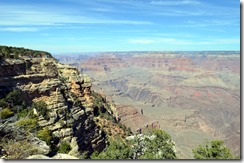 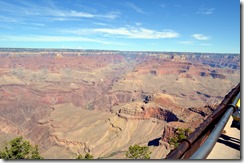 From our vantage point, we could see tourists standing on Mather Point.

The Point was the next stop on the free shuttle bus so away we rolled. A short ride later we stood looking back at the Visitor Center, far away across the wide expansion. We paused to savor the far reaching beauty of our earths deep crevice.

Boarding the shuttle once again, our next stop was Yavapai Geology Museum, built in 1928, full of fascinating exhibits of fossils and minerals, additional history of the area and descriptions of its past inhabitants. 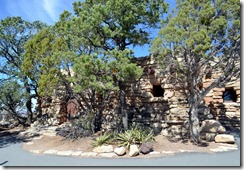 After a few more strolls around the point, a second pass of the exhibits inside to get up close and personal with archeological canyon findings. 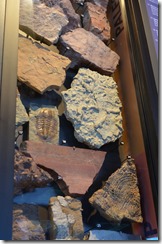 Pausing outside the museum, I took a wide sweeping view of the canyon from Yavapai. 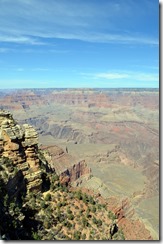 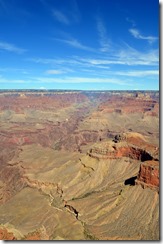 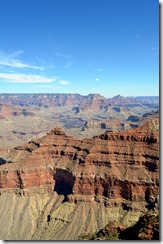 As we exited, I decided the heavy wooden hand hewed door and intricately forged metal hinges deserved remembrance with a Kodak Moment.   We departed the area and caught a shuttle back to the Center.

Arriving back at the Visitor Center we stopped to sit in the sunshine.  People watching is always a fascinating pass time when near a destination visited by tourists from around the world. Watching mini kids dashing around the square, chatting in a multitude of languages and laughing together, best friends until their parents called, then each left to go their separate ways. The sun was mild, breezes were gentle and our moods stayed in relax status as we strolled back to our car.

Driving out of the Park we saw wild turkeys and a variety of tiny rodents scurrying about foraging for lunch. We maintained our tranquil state for the drive out of the Park, pointing the car towards the National Geographic Visitor Center in town to watch the IMAX movie. Overly crowded with tour buses when we first entered town this morning, now the parking lot was near empty. It is worth the cost, if you have a Groupon or discount coupon, the movie offering additional history and stories of our brave ancestors who mapped the river. We bought a few unusual trinkets before driving back to pick up KatieBug, settle down inside LilyPad and turn in for the night.

An early bird crack of dawn rise and we were on our way to Albuquerque New Mexico.  Desert drives are long, hot and straight ahead for hours.  Some days it is so hot, the heat bouncing off the pavement distorts and blurs your view of what’s ahead. 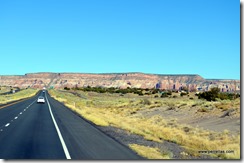 Driving through to Albuquerque was the plan.  After an hour of rolling, I smelled an overpowering auto repair shop scent and noticed grey whiffs seeping into the back of the motorhome. I dashed around opening windows until we stopped at a rest stop, turning on our Fantastic Fans to suck the exhaust fumes outside. Attempting to continue on, within a short distance, the inside quickly filled up again, this time with dense choking exhaust fumes. I struggled to take in fresh air but the fumes were overpowering and I had to stick my head out the window.  John desperately searched for a safe place to pull over, at Winslow Arizona’s first exit we pulled off road into the parking lot of a defunct gas station, now a struggling-to-survive Indian Gift Shop. 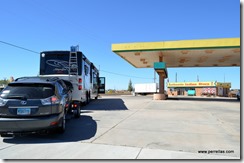 While I aired out the inside, John crawled under and found a broken and severely leaking exhaust bellow. A quick call to our tow company confirmed, even with all windows open, driving with exhaust pouring into the motorhome was dangerously hazardous to our health. Well duh, but our other choice being? A Cummins repair dealership was our only option for leak repair but we were 230 miles from the nearest Cummins Dealer. The exhaust gave me a pounding headache, I was struggling to breathe and even KatieBug was sneezing and making choking noises because of the fumes. John used metal tape for a make-shift repair, temporarily controlling the damaging fumes and we drove with all windows open at a greatly reduced speed, exhaust still trickling in, until we reached Albuquerque New Mexico.

With evening approaching, we arrived at Route 66 Casino and RV Park, pulling in and setting up while the sun sunk slowly and the moon began its rise into the sky. 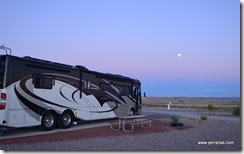 Engine off, smell predominantly aired out, we slept lightly, full of dread and anticipation of our Cummins repair appointment first thing in the morning. I knew none of us would awake refreshed in the morning.

Rising early, sunrise filtering through the clouds. Science News states that pollution and small particles in the air cause the brilliant sunrises and sunsets to glow warm colors. We had greatly contributed to the exceptional colors we were experiencing this cool calm morning. When we arrived at Cummins we dropped LilyPad and went for breakfast. Noon was the pick-up time. By one o’clock the motorhome had not been taken inside the bay for repair. The next three estimated times went along the way of the first as we sat in the waiting room. By five pm, we were tired, uncomfortable, our lungs still struggling to recuperate from the fumes.  We had waited long enough for the promised return of our rolling home and demanded it be given back. John expressed his displeasure to the manager and we drove out of the lot at five thirty, repaired and ready to roll off down the road. The repair part had come gratis from Tiffin, the installation cost was minimal. Once more, a crises was side stepped and we were off to our next destination, a Bucket List item for me, one of the largest balloon festivals in the country.  WooHoo!