If Santa Clara was a heatwave, Oakhurst was the fires of Hades. On the way, the weather was hot and dry. 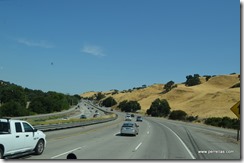 When we arrived it was a combustible 117 degrees.

Our 30 amp site sits in the dust and gravel of the lower campground at the foot of the steep set of steps descending from the Oakhurst Elks Lodge.  Extremely reasonable, but you get what you pay for. 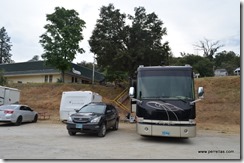 We kept our generator running to keep us cool and finally retired with our 30amp plug supplying our electricity at 11pm. 30 amps will only run one air conditioner, nothing else, and no ability to keep 350 square feet below 90 degrees when temperatures exceed double digits. Nighttime brings the cooler and more bearable temperatures.

These past weeks of “it’s always something” have snuck up and pounced, substantially squeezing enjoyment from our West Coast trip. Being stalled where temperatures reach those of an inferno is unpleasant but without alternatives.  Our car won’t hold a charge and must be jumped to start, our air bed won’t release air and is stuck on hard-as-a-rock, the left side of LilyPad is without power and, although no leaks show up on the ground, LilyPad is not holding coolant in the radiator. I am certain the intolerable heat showed up to show us, no matter how bad things are, they can always get worse.

Because steep grades up and down hills would put considerable stress on our car’s 12 year old engine and cooling system, paired with this hellfire heat, we had planned to rent a car to traverse the mountains around Yosemite National Park. Expecting the rental but not a repair bill for our trusty elderly Lexus, we reserved a standard size car and searched for an auto repair shop nearby.

After picking up the rental, we toured around town and stopped at the Visitor Center for information on local dining, shopping and tourist destinations. The two biggest old growth Giant Sequoia groves were closed for reforestation and we inquired about any others to visit. Shadow of the Giants National Recreational Trail, Nelder Grove, was open but a distance away and several miles down a dirt road. Determined to hike among the Sequoias and inhale those marvelous scents, we drove the distance.  On the way we passed an old forest fire,

drove down narrow roads used occasionally as range cattle crossings and finally came to the sign designating our arrival at the Grove. 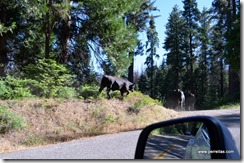 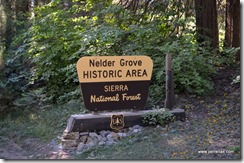 Turning off on a lumpy bumpy dirt road, we slowed to 10 mph and opened the windows to take in the cool forest scents. 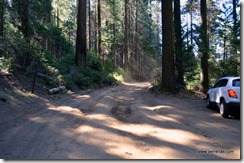 Rutted, most of it passible by only one car at a time, we ended at the trail parking lot, took the only open spot, near the vault (pit) toilets. Disgustingly dirty, I gave them a wide berth. Obviously, those here do not take pride in their job of cleaning the vaults as John and I did over the past five years.

We climbed up the trail, stepping over densely packed decaying woody limbs and fresh dropped needles, the forest floor sinking beneath our every step.  A stream ran parallel to the trail.

Within a few minutes, the woodland gnats found us, dive bombing our ears and noses.  Minutes later, the scourge of the flying in insects, mosquitos, swarmed our arms and faces, franticly searching for veins. Not prepared for the attack, we hurried back to the car, stopped for a Kodak Moment beside the largest Sequoia we spotted in the area and followed the dreadful road back to civilization. 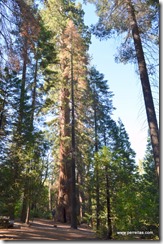 Close up of John standing by the Giant Sequoia. 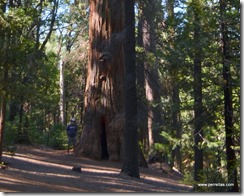 Smoldering hot days spent with blinds closed and never venturing outside wears on my nerves especially when there are no TV stations and internet is sketchy. On our second day of rental car use, too late to return it for another car, we learn the a/c cools only when we are traveling at speeds in access of 35 mph. Unbelievably inconsiderate of a rental car company located in blazing hot summer destination. Taking the car back for an exchange now would result in a loss of our one and only day of exploration in Yosemite National Park. Our solution was 440 A/C. Four windows down, 40 mph , doable on main roads but not something possible on the multiple hairpin turns that lead to the park.

Warned by the Visitor Center that Yosemite Nation Park is extremely crowded after 11 am, we rose at 6 am and were on the road by 7:30. The drive is long and curvy, steep grades in both to and from directions.  We arrived at Glacier Point, our first stop, at 9 am. Dogs are allowed in the park and KatieBug was happy to be out of the warm car.  She was not a happy camper traveling so far without a/c. The three of us would remain somewhat glistening the entire day.  Our respite, the short periods we stood near the waterfalls.

Today’s plan of attack, after Glacier Point, we would retrace our steps back to Yosemite Valley, stop and park for the hike to Bridalvale Falls and hike to the base of Yosemite Falls.  This said, no plans are ever set in stone. After five years, I have come to realize planning and arrangements are fruitless. Alterations will be made, some daily, a few hourly and in desperate situations, minute by minute. I have never been good at flying by the seat of my pants but I am now less a mess of frustration when traumatic and/or dangerous situations arise.   I am learning to eat what’s served, even when I spy a bug swimming in my soup.

Along our journey to the Park, we stopped to stretch our legs and watch the snow melt waters flowing onto the valley floor. 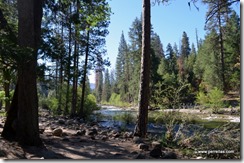 Climbing upward, we stopped for our first view of Yosemite, an overview of the areas we would see up close. 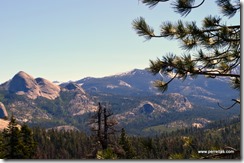 In the distance, snow on Yosemite mountain tops. 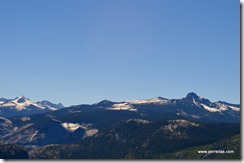 The Glacier Point Overlook had a decent paved walkway leading to several outlooks and falls. KatieBug was allowed on all paved paths but not the dirt trails.  With the suffocating heat, we nixed taking lengthy hikes but the more obvious reason, narrow earthen trails and the valley floor were a long steep downward drop. 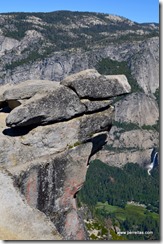 One of the big rock mountains at the overlook is Half Dome, a split rock of gargantuan proportions. Several of the domes in Yosemite are favorites of rock climbers but we didn’t spot climbers on the rocks today. 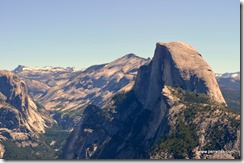 The overlook rim spanned nearly a mile and we stood admiring the view while dozens of tourists took selfies from the edge. I had to wait for the crowds to part to catch my Kodak Moments.

The view in another direction a few yards down the walk, North Dome and Basket Dome. 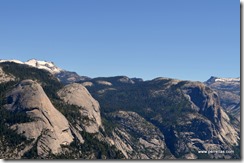 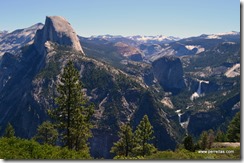 We had success finding a parking spot and as we walked back to the car, we spied a strange auto antenna décor two spaces down.  Odd folks in these here parts. 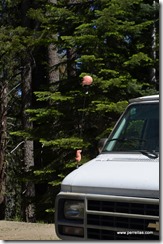 After more than an hour of exploring the Point, we drove to Bridalvale Falls and walked up the path to the welcome spray of tumbling waters.

Relaxing hike, cooling spray, comfy benches at the base for watching the rushing waters down below the falls.  Well worth the effort it took to find parking. 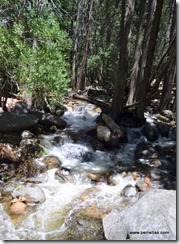 Easy walking to Lower Yosemite Falls with more bursts of cool mist when we drew near.  The crowds were thickening but had not become overwhelming. 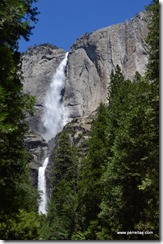 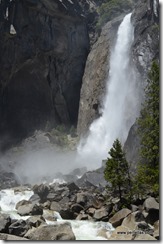 Meeting an abundance of fur babies on the trail, we imagined this trail had the most canine visitors. KatieBug was relaxed and happily perched next to us on the bench, watching two legged and four legged souls walk by. Near the falls I spotted a metal plaque, dog paws imprinted in brass. No sign of the significance but with all the padded prints in the sands, it seemed likely a paid tribute to the four legged who had gone on before. 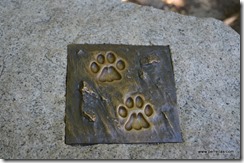 Passing by a dainty little chapel in the woods, Yosemite Valley Chapel was closed but was posed in a fairytale like setting.  Built in 1879, the chapel is kept in peak condition for a variety of celebrations.

Driving along the floor of the park are huge mountain walls and open fields studded with clusters of tall trees. 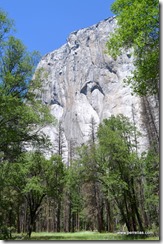 The Big Trees Golf Course was established in 1918 and is one of the few organic golf courses in the US. No pesticides are used on the course and recycled gray water is used to water the greens. Not a surprise to me, the lawn is green, lush and healthy.

One more stop on the way out, Tunnel View. The Tunnel was Yosemite’s last stop when exiting the park. KatieBug was joined by several other fur babies just coming off the trail with their humans, all sitting enjoying the view. Our troupe being hot and tired, we stretched out our legs, took a photo and went on our way.

Returning our rental, picking up our car now sporting a new battery and a few minor additions to keep the oldie but goodie in top auto health, we arrive back at LilyPad.  After a check up under LilyPad’s hood, John relays disappointing news.  All previously tried fix-it-yourself procedures have not been successful.  Something continues to be amiss.  The closed radiator system seems to have a breach hiding somewhere inside the dark cavity of diesel pushing mechanical workings. John has filled the gauge twice, two full gallons, but the glass level reader remains empty, fluid disappearing into the unknown.

A call to the nearest Cummins, in Fresno California, secures our appointment for diagnostics.  This was not a planned stop so now we must find a site for an undisclosed time period.  Our three necessities; being near Cummins, 50 amp hook ups, ample space to pull in and out multiple times.  After another quick series of calls, John finds us a spot at the Fresno Fair Grounds.

Knowing we will be limping to Fresno but believing all will be kosher in time, I began my standard stash and secure duties for our unplanned trek, beginning before sun rises next morning.

Eager to be free of roasting temperatures, we turn in early, our two remaining air conditioners struggling along in unison.